Whether you have someone special to celebrate Valentine’s Day with or not, never forget that you deserve the very best. So how about some sweet, sweet ikemen buns?

But whose buns are the best? I’m glad you asked.

(All of these recommendations – with the exception of Steam Prison and CR: Wintertide – are games that I have played and immensely enjoyed.)

Let’s start off with something not only completely FREE to play, but of a far higher quality than some commercial otoge out there.

Created by Dicesuki, Cinderella Phenomenon is available on Steam and on the creator’s website.

Four years after the end of the Great War and the loss of her mother, Crown Princess Lucette of Angielle is still struggling to come to terms with her new life and step-family. Cold-hearted and bitter, Lucette’s life is once again turned upside-down by the Fairytale Curse, she is thrown into a battle to regain her crown in a fractured kingdom where nothing is as it seems…

Every guy gets his happy ending so you can sit back and let all of your dreams come true.

The story begins with the main character, Cardia, isolated and alone in a mansion on the outskirts of a 19th century steampunk version of London. A victim of a mysterious affliction that makes her blood a virulent poison and her touch instantly lethal, Cardia is shunned as a monster. Through a number of events both grand and seemingly insignificant, Cardia is pursued by the Royal Guard, kidnapped by the gentleman thief Arsène Lupin, and joined by a myriad of other handsome figures out of the best of western literature. With her new-found friends (and suitors) Cardia ventures out in the world to unravel the mysteries surrounding her very existence.

Triangulate – Experience the magic and chaos of a two-on-one date. Play with dynamics (and hearts) by bringing multiple members of Lupin’s gang on a wide variety of romantic romps. Sit back and watch the fireworks!

Every End Has a Beginning – Learn more about the dashing detective Herlock Sholmés and the mysterious Finis in the continuing sagas involving the newest men in the Code Realize universe.

The (New) Belle of the Ball – Cantarella, the mysterious young lady Cardia met during one of her many adventures, gets her turn in the spotlight. Join Cantarella as she gets caught up in the chaos that always seems to surround Lupin and his gang.

This release comes as a Standard and a Limited Edition. The Limited set has a very good selection of merch as shown below and is available for both the Vita and the PS4: 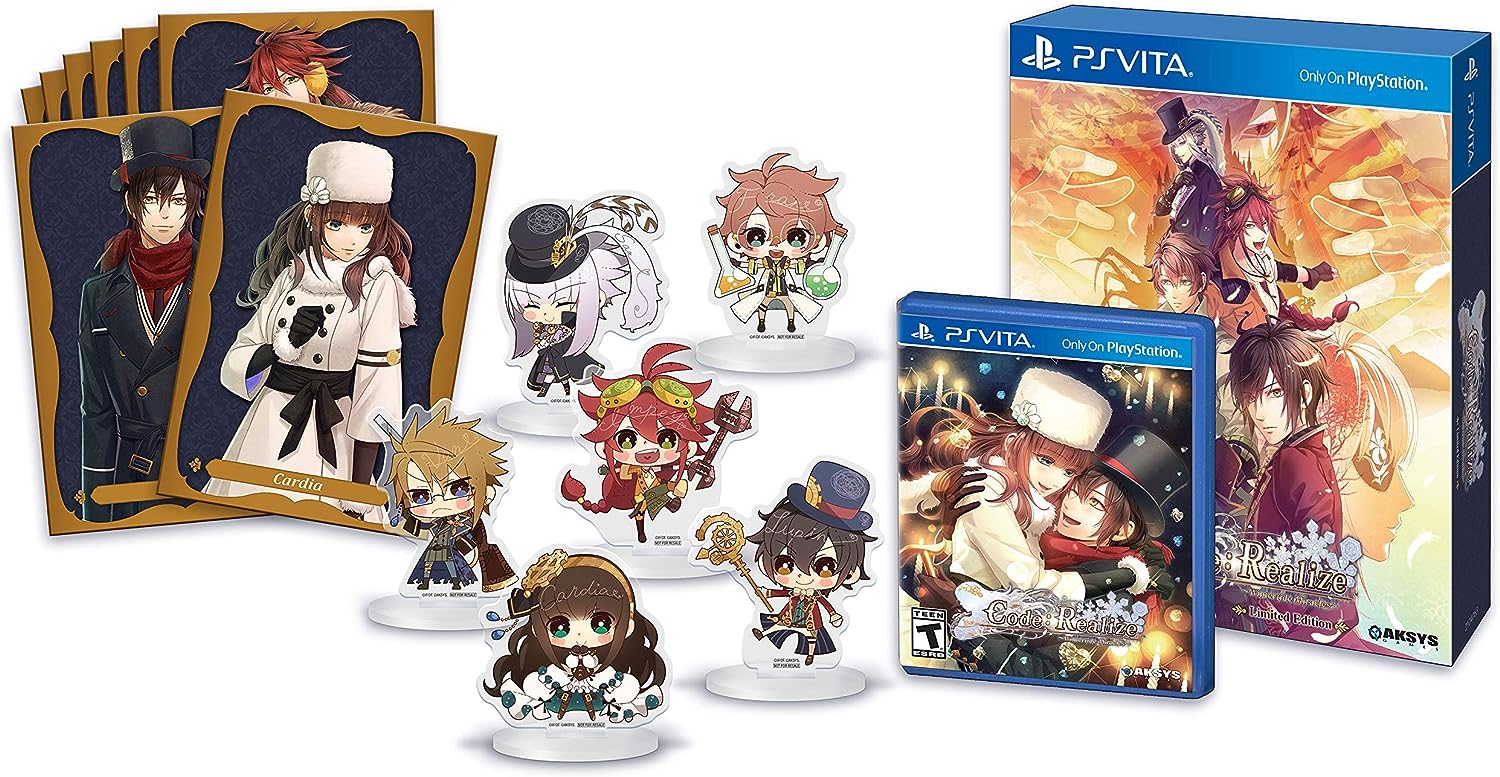 If you’ve never played the original I highly recommend it. It’s one of my top otome games starring one of the best heroines ever created: Cardia Beckford. Here is the first game. It’s also available on the PS4 and this version includes both the first game and a different fandisc called Future Blessings.

Mangagamer releases Steam Prison on Valentine’s Day both on their site and on Steam. Their site currently is having a pre-order sale! Please be aware their site is NSFW!!!

There is a content warning for depictions of sexual violence and other uncomfortable themes.

“There are two kinds of people: the rulers and the ruled.

The Heights are a gorgeous utopia. The Depths, a filthy industrial wasteland. Our heroine, raised in the Heights, has nothing but contempt for those below. Now an observation mission requires her to descend into that world, and the gears of fate have begun to turn.”

Next up is Collar x Malice, a fast-paced, action-packed detective otoge. While not as fluffy as the other suggestions it has its share of romance.

A dangerous shadow organization launches a campaign of fear and violence in the city of Shinjuku, pushing society to the brink of chaos. As a young police officer tasked with restoring order, you become the target of an attack, and have a poisonous collar attached to your neck. With the situation spiraling out of control and time running out, five mysterious strangers appear to aid you in your quest for the truth. Who can you trust? Will you be able to save yourself and the soul of Shinjuku from the clutches of oblivion?

The best otoge I played last year was Psychedelica of the Ashen Hawk. You don’t need to play Psychedelica of the Black Butterfly to play this one. Definitely pick it up if you’re more in the mood for an immersive world with action, romance, tragedy and a ton of mystery. The heroine is also a badass.

“From the masters of the genre, Idea Factory and Otomate, Psychedelica of the Ashen Hawk is a suspense-filled tale of a young woman who was born with an eye that gleams with a scarlet light. In order to avoid being cast out, she masquerades as a young boy and lives in a derelict tower on the outskirts of town. One day a mysterious treasure is stolen from the city church. Our heroine learns that not only do magic stones exist and are hidden within the city, but also the secret of her origins.”

You can pick up a copy here!

While not an otome game, The House of Fata Morgana’s entire story is a romance. Without a doubt this is my favorite visual novel. There are trigger warnings in this game which you can read about here. It’s an intense story but it’s one of the most beautifully written ones I’ve ever had the delight to read and I can’t recommend it enough. It’s currently 50% off on Steam until Valentine’s Day! 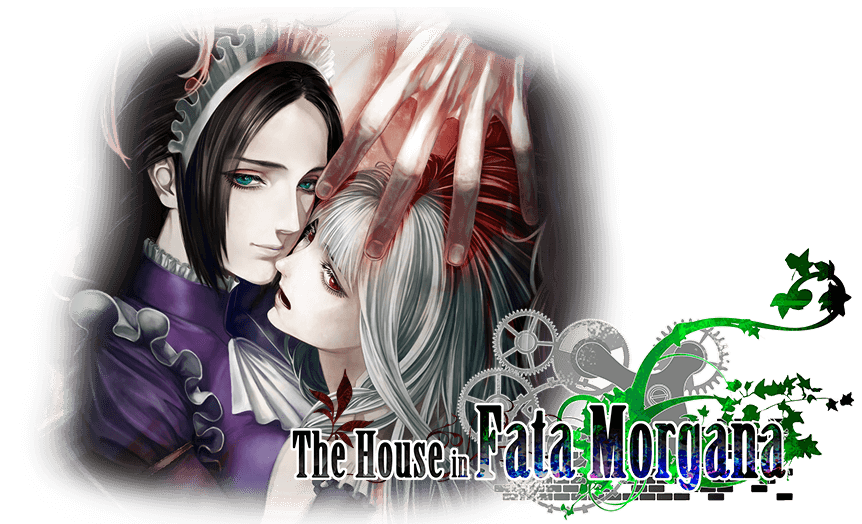 You awaken in a decrepit old mansion.

A woman with eyes of jade stands before You, informing You that You are the Master of the house, and she Your Maid. However, You have no memories, no concept of self—or, indeed, any certainty that You are even alive.

The Maid invites You to join her on a journey through the mansion’s lifeless halls, to behold the numerous tragedies that have befallen its residents. She suggests that among them, perhaps You will find some trace of Yourself.

Beyond the first door lies the year 1603.
It is an era of unparalleled beauty, where art and theatre flourish. Roses bloom abundantly in the garden where the inseparable Rhodes siblings play, and though they appear to be free of worry and strife… not everyone is content to see them happy.

Beyond the second door lies the year 1707.
In this era, the mansion lies in ruins, and a beast dwells within. He claims to yearn for a life of serenity, but it is not long before he yields to his innate savagery and a massacre ensues.

Beyond the third door lies the year 1869.
In this technologically advanced era, people are always on the move. The mansion’s master is an ambitious businessman who has invested in the rail industry. However, his obsession with wealth and power leads him to neglect and mistreat his wife.

Beyond the fourth door lies the year 1099.
The Maid tells You that this is the final tale. In this era, You see a young man who claims to be cursed and a girl with white hair, called Giselle, who has been branded a witch and marked for death.

Having borne witness to these four tragedies, each set in a different time and place, You are now free to choose whether You wish to end Your story here… or press on.

But there are those who would say,

“You were able to bear them because they weren’t your tragedies.”

Nightshade is available on Steam and Switch (I don’t know if the “translations” are ported from the English release or are actually machine-translations). If you miss Hakuoki but are looking for more romance and a heroine that can actually fight and isn’t frustrating, here’s your game.

About:
During the Sengoku Period the two main factions of ninja clans, Iga and Kōga, warred against each other for decades.
In the year 1593, Nobunaga Oda started the Tenshō Iga war, decimating most of the Iga ninjas in the process.

The very few that survived were absorbed into the Kōga clan, despite their past rivalries.After 17 years the Sengoku Period finally came to an end, and Japan was unified.

Enju (Protagonist), daughter of Kandō Ueno, the Head of the Kōga clan, spends her days training diligently in hope of becoming a full-fledged ninja like her peers.

At long last she is assigned to her first mission, but finds herself caught in a dark conspiracy――.

If you want to look into more options please check out my reviews at the top of the menu. I have reviewed many games across several platforms including mobile otome games, PC, and more. Let me know what you would recommend down below in the comments!

4 thoughts on “Snag Some Otome Games this Valentine’s Day 💕”